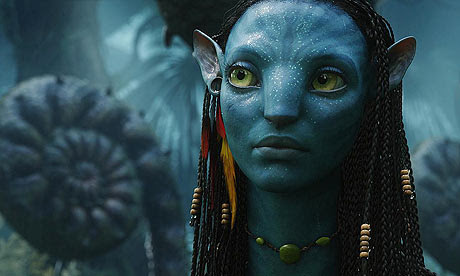 I’ve seen Avatar three times in the past five days.

Suffice it to say that Hollywood rarely makes direct references to racism/white supremacy especially when it comes to African people.

Avatar does it and does it well.

I loved the film because it is one of Hollywood’s best attempts to deal with the horrors of white supremacy and the African response to it. Julie Dash’s hauntingly beautiful 1991 film Daughters of the Dust was remarkable for its rendering of the intersection of racism, white supremacy and African spirituality. James Cameron’s latest film expands on Dash’s contribution by providing science fiction as a backdrop for discussing global white supremacy.

Bryant: Hi ya, Deck...You wouldn't have come if I just asked you to. Sit down, pal. Come on, don't be an ass-hole Deckard. I've got four skin jobs walking the streets.

It is interesting that Dick wrote “Androids…”during the civil rights era --- the year that Martin Luther King was assassinated.

It is also interesting to note how white critics are making weak attempts to transform the blue Na’vi people into anything but Africans.

Repeat after me: The Na’vi are clearly Africans and here are the proofs:

1. All the lead roles are played by Black people (DUH!)
a. Zoë Saldaña plays Neytiri, the princess
b. C. C. H. Pounder plays Mo'at, the Omaticaya's spiritual leader, Neytiri's mother, and consort to clan leader Eytucan
c. Laz Alonso, plays Tsu’tey, Sulley’s rival for Neytiri and heir to crown of the Omaticaya
d. Wes Studi, plays Eytukan, the leader of the Omaticaya and is the sole indigenous character (Cherokee) among the clan

2. The phrase, “I see you” is taken directly from the Zulu (South African) greeting, "Sanibonani" which means, “I see you”. The reply, "Yebo, Sanibonani". “Yes, I see you”, has been widely used for centuries among the Zulu.

3. The Na’vi wear locs in their hair (not “dreadlocks”) throughout the film, a hairstyle that is as old as Egypt (KMT)

4. The dress of the Na’vi is an amalgam of south and west African clothing

5. The names of the Na'vi are direct borrowings from Africa. (Thanks to Charisma (below) for this insightful point. "The princess' name is Neytiri, which immediately caused me to think of Nefertari; a woman with beauty and brains who ruled in the new kingdom with her father. Another example is one that almost jumped off the page as I read your blog! Mo'at as the spiritual leader in the film (according to the blog), shares a profound reflection and parallel to the ancient Goddess Ma'at.

In ancient Kemet Ma'at is known as the female balance. There are 7 virtues of Ma’at, which are truth, righteousness, harmony, balance, reciprocity, justice and order. Ma’at is the symbol, energy or deity of truth justice and balance. There are 42 declarations of Ma’at that were used in ancient Kemet as a moral code for the living and the standard that the dead would be judged by."

White reviewers of the film are in a state of denial about likening the Na’vi to “indigenous Americans”. Historically, violent, rapacious, imperialistic, white supremacist attacks have not only been directed toward Africans, but indigenous people as well. Indeed, if Avatar doesn’t do anything else, it shows that white supremacy directs its malicious onslaught against all people of color both inside and outside of Africa.

The reaction to the film is also split along racial lines. Some white critics have referred to it as “cowboys and Indians in outer space”, or emphasize its “technical achievements” or dispassionately talk about Cameron’s innovative use of motion-capture animation technology. Black people see the film for what it is --- a metaphor of how Africans have been treated for centuries, and the European worldview that encourages environmental degradation, ignores the sacred and dehumanizes any group it seeks to subdue.

It’s hard for people --- mostly white --- and some people of color, to talk about the most troubling social issue of today --- racism but Cameron has made this task a little easier by providing a visual, political and spiritual experience which can become a vehicle for doing just that. Don’t spoil it by twisting the film into something it isn’t --- “cowboys and Indians in outer space”… (((sigh)))…
Posted by Ray at 10:07 PM