Viral on the 'net, this video says much about how Our hair is viewed by Ourselves. Is it child abuse --- both physical and psychological? You decide...

The Black Funeral of Michael Jackson 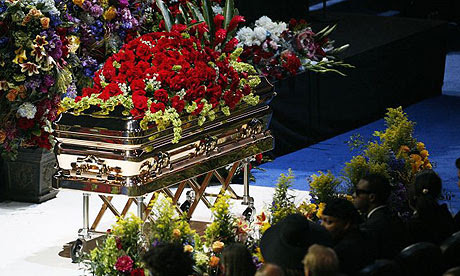 
Funerals tell us more about the living than the dead. It's why anthropologists often begin with rituals of death as an entry point for understanding societies and cultures.

I remember watching the funeral of Princess Diana. It was a perfectly British event: the poignant, silent march of her children, the bells tolling at Westminster Abbey, the red coat pallbearers. But I remember being taken aback as the car carrying Diana's casket drove through the streets of London. I was surprised because at that moment the mourners began to applaud.

They'd stood for hours lining the streets and as the casket passed they needed to grieve collectively and publicly. Stiff-upper lip British culture does not have a mechanism for such public grieving. There is no piercing death wail, no garment rending, no ceremonial dance, so instead the British applauded. Those applause revealed the missing place in English life for public mourning.

The death and remembrance of Michael Jackson has been an interesting window into American culture, its relentless cable news cycle, and the overwhelming but false sense of intimacy our celebrity culture engenders. But for me it was the peek into African American culture that was most intriguing.

Within a week of Jackson's death I watched the avatars on my twitter feed turn from Iran-solidarity green to iconic photographs of Michael Jackson. But the photos were exclusively of "black" Michael Jackson: some from his childhood, some from the Off The Wall era, and many from the Thriller era. Few of my African American tweeps were visually remembering the Michael Jackson of the past decade with diminished features and whitened skin.

Memorializing Jackson included selective collective memory that allowed African Americans to see him as belonging especially, if not exclusively, to black folks.

Some African Americans were incensed by the misogynist, racially stereotypical B.E.T. Awards that gave the first public tribute to Jackson. Many have been critical of B.E.T as a network for more than a decade, and the tribute to Jackson renewed that those criticisms. The contrast of Michael Jackson with Soulja Boy felt particularly stark, regressive, and embarrassing.

Jackson's passing inspired memorials that reflected local cultures, my favorite was the Second Line in New Orleans, but it was the massive funeral in Los Angeles on Tuesday that was most revealing. Michael Jackson was an international music icon and his memorial was covered on mainstream media, but it was black tradition most fully on display Tuesday.

African American death rituals have long been celebratory as well as mournful. As a marginal people whose collective identity is rooted in struggle, death is celebrated as a release from pain, inequality, and torment. As a deeply religious people, death is celebrated as an opportunity for reunion with God. As a people who were often denied dignity in life, the dignity of a proper homegoing is a critically important sign of respect. Along with these celebratory aspects of funerals, death rituals among African Americans are marked by loud, deep, displays of emotion and public grieving that mark the sense of loss experienced by the whole community.

All of these aspects of black life were on display Tuesday. And it tells us more about us than about Jackson himself. Jackson's radical surgical choices largely eliminated his black phenotype. Jackson's romantic choices did not include black women. His wealth and eccentricities set him apart from most black people. In the final years of his life his music was much more popular in European and Asian countries than among black American listeners. But in death black folks embraced Jackson.

Memorializing Jackson reminds me that death is still a segregated business in America. Funeral homes still anchor black neighborhoods and are a central path of black entrepreneurship. Though he may have transcended or "escaped" blackness in life, Jackson was rendered fully black in death. And that says much more about us than about him.
Posted by Ray at 10:25 AM No comments:

The Prophecy of James Baldwin on Michael Jackson

"The Michael Jackson cacophony is fascinating in that it is not about Jackson at all. I hope he has the good sense to know it and the good fortune to snatch his life out of the jaws of a carnivorous success. He will not swiftly be forgiven for having turned so many tables, for he damn sure grabbed the brass ring, and the man who broke the bank at Monte Carlo has nothing on Michael.

All that noise is about America, as the dishonest custodian of black life and wealth; the blacks, especially males, in America; and the burning, buried American guilt; and sex and sexual roles and sexual panic; money, success and despair--to all of which may now be added the bitter need to find a head on which to place the crown of Miss America.

Freaks are called freaks and are treated as they are treated--in the main, abominably--because they are human beings who cause to echo, deep within us, our most profound terrors and desires."